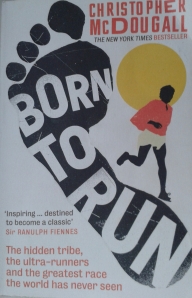 Okay, so where do I start?  Actually the real problem is where and when do I stop?  Christopher McDougall, with the assistance of others (whom he thanks on the back pages), has created a tightly written journey of self-discovery whilst unleashing humorous and enthralling observations, theories and scientific research into nutrition, trainers, health and the Mexican Tarahumara; which ultimately all coexist under one ultra-heading – RUNNING.

I ran the 2010 London Marathon out of sheer stubbornness.  I briefly mentioned it to a couple of people close to me that maybe I’ll endeavour to do the marathon – to which they replied, really?  That was my starting gun.  I’ll show them; and I did.  Not being a runner, I set up a training schedule which dragged me though the depths of winter and over the finish line.  Like most will say, the last six miles are HELL!  And it wasn’t the first time I’d thought I’m just not born to run.  But, I finished with a slow jog-like-shuffle and no-one can take that away from me.  Just you try.

I’ve been to Mexico a couple of times and I absolutely love it so when I saw this book was mainly set there I thought it might be worth a read.  Little did I know this was a massive understatement.  This book will now be one of those I can’t stop wanting to shove down other peoples’ throats.  I loved it.

A factual book with an easy flowing, fast-paced narrative follows injury ridden Christopher in his search for Mexico’s Tarahumara Indians who can run for hundreds of miles, without injury or rest.  His search begins with the elusive and mysterious Caballo Blanco – The White Horse.  According to McDougall, Caballo had, ‘come to Mexico years ago and trekked deep into the wild, impenetrable Barrancas del Cobre – The Copper Canyons – to live among the Tarahumara, a near mythical tribe of Stone Age superatheletes.’ (p4).  These superathletes run in a self-fashioned, thin leather sandal and this caught McDougall’s interest.

On this discovery he looks into barefoot running and how the trainer industry seems to be causing injury with all it’s cushioning, rather than preventing it.  Throughout the book we see people who have suffered from running pain and injuries who have specialists telling them running is bad and to invest in better trainers.  However, even with the new trainers the pain didn’t subside.  Ted is one of these stubborn sufferers and being stubborn he decides to walk the Marathon barefoot rather than give up.  He commences his barefoot training slowly and discovers how much better he feels.  Yet, every time he puts the trainers back on he feels the pain again.  Ted wanted answers so he did some research and found an international community of barefoot runners lead by Barefoot Ken Bob.

Barefoot Bob ‘begins: Shoes block pain, not impact!’  Ted realises, ‘When he went barefoot, his form instantly tightened: his back straightened and his legs stayed clearly under his hips.’  “No wonder your feet are so sensitive,” Ted mused.  “They’re self-correcting devices.”’ (p 57)

It’s not just  a self-diagnosed runner who thinks trainers are the devil, ‘Dr Daniel Lieberman, a professor of biological anthropology at Harvard University (states): “A lot of foot and knee injuries that are currently plaguing us are actually caused by people running with shoes that actually make our feet weak, cause us to over-pronate, give us knee problems.  Until 1972, when the modern athletic shoe was invented by Nike, people ran in very thin-soled shoes, had strong feet, and had much lower incidence of knee injuries.”’  In 2008 he stated, ‘“If there’s any magic bullet to make human beings healthy, it’s to run.”’ (p168)

There are a number of doctors and scientists who have researched into trainers and barefoot running and, ‘the puzzling conclusion is: the more cushioned the shoe, the less protection it provides.’ (p173).  The research shows that our feet naturally and instinctively look for stability, so when the feet are highly cushioned we plant ourselves down harder in search of it.  It seems our feet are fine, just the way they are.  Dr Hartmann, one of the world’s leading physical therapists says, ‘“Pronation has become a very bad word, but it’s just the natural movement of the foot.  The foot is supposed to pronate.”’ (p175).   He goes on to discuss how support orthotics are weakening the arch, ‘“…the arch, the greatest weight-baring design ever created.  The beauty of the arch is the way it gets stronger under stress”’ (p176)

All is not lost, weak-footed people.   Apparently we can train our feet and they can become stronger again.  And guess what?  The trainer industry now has a whole heap of ‘barefoot’ style running trainers to help us alleviate our pain and the strain from the weight of our wallets.

By now, if you’re still reading, you will see what I meant in the beginning about not being able to stop, and I’ve only touched the surface on that subject.  I will try to be briefer with nutrition.  Let’s say there’ll be less waffle.

A lot of the people believe, and research seems to show, that a wholefood diet is best.  Natural food from plants and not from animals: fruit, vegetables and whole-grains.  This way the body doesn’t ‘carry or process any useless bulk’ and ‘carbohydrates clear the stomach faster than protein’ leaving you feeling lighter, which means it’s easier to run.  ‘Vegetables, grains and legumes all contain the amino acids necessary to build muscle from scratch.’ (p192/3).   Horticulturalist Tony Ramirez discusses phenols: natural plant chemicals, combating disease by boosting your immune system.  Cornell University found corn has the highest number of phenols and is ultra-low in fat.  ‘According to Dr Robert Weinberg, a professor of cancer research at MIT and discoverer of the first tumor-suppressor gene, one in every seven cancer deaths is caused by excess body fat.’  He says, ‘“Change your lifestyle, and you can reduce your risk of cancer by sixty to seventy percent.” Colon, prostate and breast cancer were almost unknown in Japan, he points out, until the Japanese began eating like Americans; within a few decades, their mortality rate from those three diseases skyrocketed.’ (p 208/9).

Weinberg believes the way to be cancer-free like the Tarahumara is to eat less, eat better and exercise more; building our diets around fruit and veg and not meat and processed carbs.  A report in 2007 by The Journal of the American Medical Association states why, ‘Because stray cells left behind after surgery seem to be stimulated by animal proteins.  Remove those foods from your diet, and those tumors may never appear in the first place.’ (p209)

So, if you want to eat like the Tarahumara, Ramirez says, ‘“It’s mostly pinto beans, squash, chili peppers, wild greens, pinhole and lots of chia.”’ (p209).  According to Ramirez you can find pinhole at Nativseeds.org.

We’re wearing the wrong footwear and eating the wrong things, but running itself is pretty straightforward right?  Wrong?  I thought we just ran how we ran, but it looks like that’s another thing we’re doing incorrectly.  Apparently we start off well; as children we just run, but as we get older we get more self-conscious and we concentrate on how fast we can be.  On Pages 110/111 Caballo takes McDougall on a run and offers some advice:

Lesson 1: Don’t fight the trail.  Caballo runs with small steps taking whatever comes his way: working with the terrain rather than against it.

Lesson 2: Think easy, smooth, light and fast.  Think easy because if it’s easy it’s not so bad.  Once you’ve practiced that you move onto light which means you can tackle what comes your way from hill to long distance.  Then comes smooth and once you’ve got that you won’t need to worry about ‘fast’ as it will come naturally.